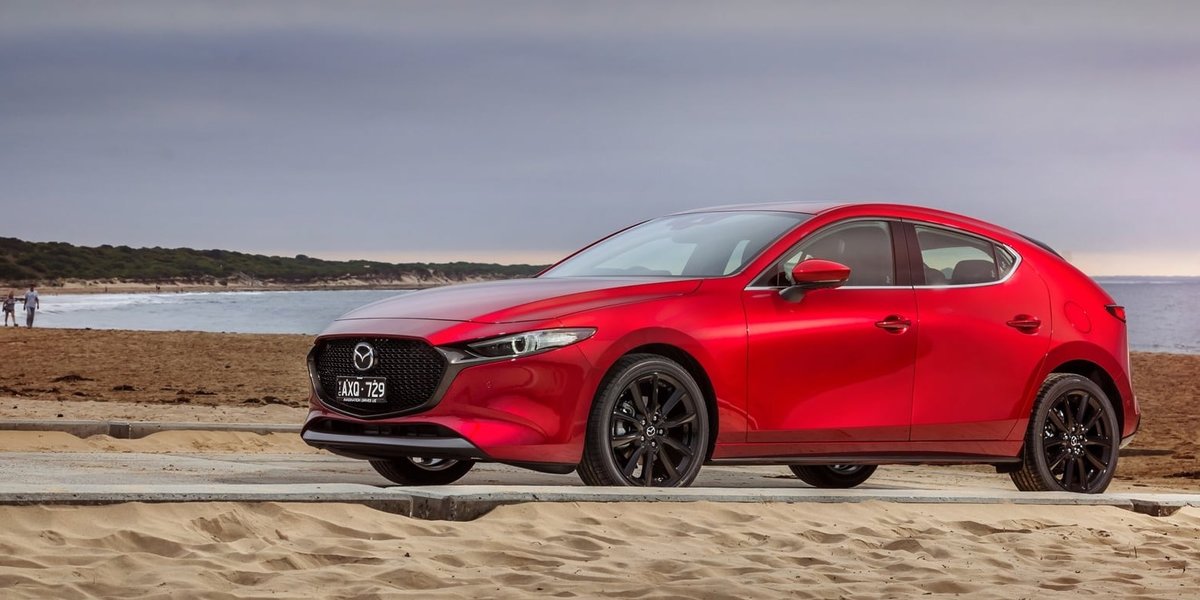 If you’re looking for a trusty city car that oozes style, comfort, and unbridled fun, the Mazda 3 hatch ticks all these boxes and more. Sporting a brand new style built from the bottom up to be a genuine pleasure to drive and own, the 3 feels like it’s an only child that has grown up with special attention and care - in a good way.

The Mazda 3 sets itself apart on many levels, here’s a breakdown of what’s what.

Classy styling a given

The first thing you’ll notice is the sleek new design. As a small family hatch, the Mazda does things a little differently. Based on the K-concept car from 2017, it takes a subtle approach to what could’ve been a very impractical design and has made a car that is both polished and exciting. The interior keeps with this trend too. It’s plush, professional and extremely well laid out. You can almost hear the Japanese designers politely discussing the best angle for the infotainment system. It’s detailed, confident in its material choices, and is simply brimming with class. Oh, and there’s a CD player. Because why not.

For a family hatch, you’re not ever expecting loads of room. But being pleasantly surprised never hurt anyone. And that’s exactly what the Mazda 3 does. The driver’s position feels low but not at the expense of visibility. You never feel like you’re missing the scenery or being swallowed up by your seat. The cabin has been treated to a range of different storage compartments. Finding them is like being on a treasure hunt. Concealable cupholders, a central storage compartment that can only be likened to Mary Poppins’s magid bag, reveals more room than physically possible. All said and done, there’s loads of headroom, even after major front seat adjustments, there’s plenty of space to feel at home, even on a long drive.

If you’re eyeing off the manual gearbox, you’re in for a treat. There’s much pleasure to be had from this satisfyingly mechanical 6-speed masterpiece. As you gather speed, you’ll notice the chassis is bursting with energy. Everything feels precise, fun, and zippy. When it comes to putting your foot down, the Mazda 3 isn’t about counting horsepowers. Rather, it delights in the pleasures of its naturally aspirated petrol engine and doesn’t complain one bit. The Mazda 3 isn’t out to prove anything, and that’s because it doesn’t have to.

As you’d expect, this car delights in snappy city driving and is comparably a whizz when it comes to refuelling. But now that there’s a hybrid engine on offer, efficiency has been flipped on its head. Mazda's Skyactiv-X M hybrid engine uses a system called Spark Controlled Compression Ignition. In a totally new invention, diesel fuel and air are combusted and compressed more efficiently, meaning this engine is far more emission friendly and will translate into fewer refuelling stops. The hybrid also captures and stores energy generated when braking. This energy is used for extra torque and powering electrical systems.

This is where the Mazda steams ahead of its rivals. Providing raw, helpful tech as standard has become a sort of part piece at Mazda. Automatic emergency braking, lane-keep assist, adaptive cruise control, parking aids, and blindspot monitoring are all standard. And there’s more. A system that monitors traffic crossing your path when reversing is surprisingly helpful and so is the rearview reverse camera. And don’t forget Mazda’s traffic sign recognition and a driver's attention alert. For automatic transmission higher trims, expect an intelligent stop and go system that can automatically maintain a safe distance between you and the car in front. All this combines with a small car record for the ANCAP safety crash rating. The Mazda 3 now sits on top with the Volvo XC60 and Alfa Romeo Giulia with a score of 98 percent on adult protection. It doesn’t get safer than that.

The Mazda 3 goes out of its way to deliver on clever features that make driving a breeze. Jump in any premium vehicle these days and you’ll probably be surprised if it doesn’t have an active driving display projection. The Mazda 3 makes this standard across the range. As well as power-folding door mirrors, LED headlights, rain-sensing wipers, and a push-button for starting the engine. No matter your preferred trim, the Mazda range spoils buyers with a car that is simply dripping with tech.

For a seamless connectivity experience, the Mazda 3 is all about instant, cordless connection. No need to tangle yourself in lengths of AUX cord, you can pair up with Bluetooth and control media handsfree with ease. Apple Car Play and Android Auto provide the usual marriage of car and phone making messaging, calling, and listening on the 8.8-inch infotainment system the easiest thing you'll ever do.

Check your assumptions about family hatches at the door. The Mazda 3 combines driving fun with a level of liveability that’s unparalleled across the class. Unlike some of the competition, the Mazda isn’t trying to hide its size. It’s a hatch and proud of it. Longer family trips are not impossible either. But if packing the boot with luggage for 4 is something you do often, you may want to opt for the Mazda 3 sedan which has 90 more litres on offer.

With seamlessness being a design focus, you do really feel like you’re one with the car. From effortless connectivity to its plucky performance, there’s never a dull moment at the wheel. The Mazda 3 delivers class from its design to performance. Pact with exciting tech and a level of safety that puts most other hatch’s to shame, the Mazda 3 is a strong answer to the already hotly contested hatch market. With a level of luxury that feels authentic and homegrown, it's simple, fun, and tenacious.